A photographer, actor and performer. He worked in the field of photojournalism, but was also involved in commercial, theatre and fashion photography. An author of photographs for the album covers of leading Polish bands and musicians, i.a.: Budka Suflera, Republika, Siekiera and Urszula. For several years he collaborated with a weekly magazine ‘Perspektywy’. However, his own artistic work was always a central focus to him – most of his artistic projects emerged in 80’s.

Antoni Zdebiak was born in Puławy. He graduated from secondary school there. In 1969-1970 he was an actor of Teatr Wizji i Ruchu (Vision and Motion Theatre) established by Jerzy Leszczyński. This theatre ‘became one of the most interesting phenomena in the area of experimental theatre, in which the essential means of expression is a human body’ [*] . This was where Zdebiak learnt the basics of pantomime and how to work with the body and he further it developed i.a. during workshops with Jerzy Grotowski. At that time – together with actors such as Piotr Cieślak and Jadwiga Jankowska – he also set up an experimental group which operated in Puławy, working in line with the methods developed by Grotowski.

Theatre, movement and the body became one of the most important inspirations and means of expression also in his photography work. He got interested in photography in the early 70’s. He was an autodidact. His first photojournalism works were published in 1971 in Lublin local press (‘Kamera’, ‘Kurier’). In this very year he also moved to Warsaw and was soon employed as a photojournalist in a weekly magazine ‘Perspektywy’, which he was working for between 1973 and 1977.

In 1978 he went to Paris and got involved in fashion photography, learning from and collaborating with Krzysztof Pruszkowski. Between 1979 and 1981 he cooperated with monthly magazines ‘Scena’ and ‘Teatr’, weekly magazines ‘ITD’ and ‘Razem’, and in 1982 he started taking photos for the Italian Press Agency, ANSA. Two years later he received two awards in Polish Press Photo Contest and became a member of ZPAF (Association of Polish Art Photographers).

The most vital period of his artistic work started in 1984. Many of his projects were of a performative character – however, these were actions aimed at and created entirely for the purpose of photography. The aim of organizing these events was always an image or the series of images. Antoni Zdebiak was a director and choreographer of the process, often also an actor. Most of the works were created at the artist’s house or in Męćmierz – a village by the Vistula river, located nearby Kazimierz Dolny. Zdebiak authored over a dozen of artistic projects, out of which only few were presented during his lifetime.

The archive of Antoni Zdebiak includes hundreds of self-portraits, taken in diverse situations and at various moments of life. Most of them constitute Witkacy-like sessions, during which he performed emotions and impersonated different characters. Selected self-portraits were gathered in ‘Księga Twarzy’ – a hand-made book, he authored preparing only three copies.

In 1989 he moved to London, where he photographed, designed and prepared sets for Teatr Małych Form (Polish Theatre in London). But first and foremost he took lessons at a film school. He studied Media Production Services in Advanced Television/Video Post-Production Techniques and Television / Video Cameras Operation and Lighting System. Within this period he made two documentary movies; one about a Yemeni boxer called Prince at the early stages of his career, the other – about Glenfiddich whisky distillery. He lived in London – with breaks – till 1991. He died in Poland in a car accident in 1991. 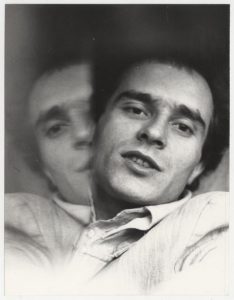