Born and raised in the Polesie region, near Pinsk, in territories that today no longer lie within the Polish borders, this picturesque and inaccessible region, along with its inhabitants, became the first inspiration for her photographs. In spite of her aristocratic descent she managed to blend with the local community and become a disinterested observer of their customs. She photographed hunters, fishermen, women doing the laundry in the lake – creating true to life portraits rather than over-stylized images. One such photograph was published, along with an accompanying text, in “Leica” – a Polish collective volume that praised the advantages of the 35mm camera. She was the only woman author to be included in the publication. Gradually she spent more and more time in Warsaw, where she moved permanently in the mid 1930s. The move visibly affected the themes she worked with, she began photographing interiors of palaces (such as the Blank, Kronenberg, Koniecpolski). In the late 1930s she won the competition for the post of photographer in the Ministry of Communication. The job involved taking a series of photographs, popularizing the beauty of Polish culture and nature, that were meant for railway car interiors. In spite of the fact that she easily found her place in the circle of artists from the “picturesque” current (which was demonstrated not only by the awards she received at competitions but also her membership in a number of exclusive photographic associations such as the Polish Photoclub), she took numerous photographs that were far beyond the established picturesque stylistics and ventured into a straightforward record of reality. A perfect example of her interest in documentary photography was the series commissioned by the president of Warsaw, Stefan Starzynski. As a part of his project Warsaw Yesterday, Today, and Tomorrow [Warszawa wczoraj, dzis i jutro], which was presented at the brink of World War II in the Warsaw National Museum, Chometowska used her camera to capture those elements of the capital city that deserved reform: wooden houses in the Wola district, dogcatchers, or garbage dumps. She also had the occasion to participate in another noteworthy exhibition related to Warsaw and mounted in the National Museum. The 1945 exhibition titled Warsaw Accuses! [Warszawa oskarza!] featured photographs of the ruined capital and people returning to their homes. In 1947 along with this exhibition she traveled to London, where, joined by her daughter Gabriella and son Piotr, she left for Argentina, never to take up the profession of photographer again. 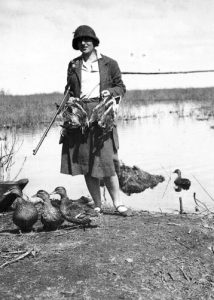