Best known for her shots of architecture, most of them devoted to Warsaw, Chrząszczowa was the author of a photographic account of the Polish capital in ruins in 1945. Born into a family of Warsaw industrialists, Pfeiffer family, Chrząszczowa first came in contact with photography frequenting the two-year Photography School in Warsaw.
After her marriage she moved in the countryside. In spite of relocating and changing her lifestyle she did not cease photographing, to the contrary, she intensified her practice. She captured family celebrations, everyday life in the countryside. Shortly before the outbreak of the war, in September 1939, she moved back to live with her parents in Warsaw. Her husband went to the front where he vanished without a trace in the eastern borderlands of Poland. The photographer spent the war in Warsaw working in “Foto-Groeger” store and was volunteer at the Central Welfare Council. Almost her entire photographic output was lost in a fire during the war. The earliest preserved collection is a record of Warsaw in ruins. Seventeen works from the series were included in the exhibition Warsaw Accuses!
Towards the end of the 1945, Chrząszczowa documented the Auschwitz extermination camp and the cities of Wroclaw, Jelenia Góra and Kłodzko. Having returned to Warsaw, she worked as a photographer up till the mid-1970s, for, amongst others, the Polish Press Agency, the “Foto-Service” studio in 8 Marszałkowska St. headed by Kazimiera Funkiewiczowa, as well as for the Exhibitions and Fairs Company, where she took extra commissions as a retoucher.

From 1953 to 1974, Chrząszczowa ran a photographic studio at the Faculty of Polish Architecture at Warsaw Polytechnic. Chrząszczowa rarely exhibited her works, she did however submit photographs to, amongst others, National Exhibitions of Photography. Her photographs were included in many albums. She also published texts in magazines “Stolica”, “Architektura” and “Kobieta”. 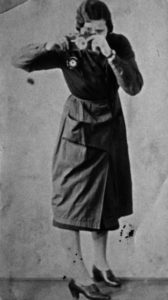