The Exhibition is to recall the life and work of Julia Pirotte (1908-2000), a Jewish photographer, journalist, communist, social activist, and author of the photographs from the Marseille uprising (1944) and – to a great extent perished – photographic documentation of the Kielce Pogrom (1946).

Julia Pirotte donated about one thousand photographs – mainly from the 1940s and the 1950s, together with her archives involving typescripts, documents associated with her professional work, also during the war, and the reprints of her photographs both in press and books to the collection of the Emanuel Ringelblum Jewish Historical Institute. The first exhibition of photographs from this collection complemented by the catalogue (Julia Pirotte. Twarze i dłonie / Faces and Hands) was presented at the headquarters of the JHI in Warsaw in 2012. In 2019-2020, due to the collaboration of the JHI and the Archeology of Photography Foundation, the prints were digitalized and by the end of the year, they will be made accessible on the website of the Virtual Museum of Photography (www.wirtualnemuzeum.faf.org.pl). The Central Jewish Library is currently working on making Julia Pirotte’s photographs accessible on their website (https://cbj.jhi.pl/).

In the Gallery of the Archeology of Photography Foundation, we present the selection of prints from occupied France that come from the most extensive series from Pirotte’s collection. Due to the interest in this very part of the photographer’s body of work, thirty-five years after the photographed events, Pirotte started to travel around the world, presenting her works on subsequent exhibitions, i.a. within Rencontres Internationales de la Photographie in Arles (1980), at Fotografiska Museet in Stockholm (1981) or International Center of Photography in New York (1984). These photographs – reprinted and signed with her name in over a hundred articles and books, and anonymously in many others – enriched the collection of Musée de la Photographie in Charleroi as well as several other collections all over the world. The photographs were also part of her first exhibitions in Poland, i.a. at Kordegarda Gallery in Warsaw (1982) and the National Museum in Wrocław.

Among the selected 40 exhibits, we present such works as street photographs, images of children in the Marseille yards, photographs from the Bompard camp and those taken during the fights in Marseille, but also street scenes from the after-war period. We have focused on the works that we found most interesting in terms of their documentary and photo-journalistic value, intentionally having resigned of some of the most popular and commonly known portraits. The showcased selection has been complemented by a biographical film and a small collection of archival materials and reprints that appeared in the press, which enables to track the reception of works from that period.

In the 1980s, Julia Pirotte used the nowadays popular expression of the ‘socially engaged’ photography to describe her works. The photographer’s archive from the JHI collection is unique as it stems both from Pirotte’s approach and her personal story. Many shots come back with some shifts of frame, gradient, and saturation. However, the series lacks the unambiguous formal decisions and the author’s control over what is considered a ‘good’, final, sanctioned frame – so often present in the case of archives. The repetitions of shots are accompanied by consistency and persistence of the recurring descriptions, including the most poignant ones like those on portrait photographs of her sister Mindla (Maria) Diament, also a member of the French Resistance, decapitated by the Nazis in August 1944. Every single photo is to serve as a testimony of her story and – in case they got dispersed – to constitute a single, independent evidence. This repetition also reigns the photographer’s collection of documents – the subsequent biography notes – either extended or shortened, the accounts on her life in the occupied France or those related to the Kielce Pogrom – returning in several newspapers, listed by the author in one of the documents.
Curators: Anna Hornik, Marta Przybyło

Julia Pirotte (née Gina Diament)
She was born in Końskowola (near Puławy) and grew up in an impoverished Jewish family. Involved in the communist activity since her youth, she got arrested and spent four years in prison. In 1934, she fled Poland and emigrated to Belgium where she found refuge in Secour Rouge (a network supporting political refugees). One year later, she got married to activist Jean Pirotte. In 1938-1940, she studied journalism and photography in Brussels. She started publishing her photo-reportages in the Belgian communist newspaper Drapeau Rouge. Among many other topics, she covered the Polish miners’ situation in Charleroi. In 1939, she prepared a photo-reportage on the Baltic States. In 1940, after the Nazis invaded Belgium, she fled to Marseille (prior to that, she had lost contact with her husband who had been mobilized in the army). She worked in an aircraft factory and as a beach photographer. Then she became a photo-reporter for Dimanche Illustré. She photographed i.a. children in the transit camp in Bombard in Marseille; she was interested in the theme of poverty and she took photographs mainly on the streets. Involved in the local resistance movement, she smuggled weapons and underground publications and forged documents. She took part in the Marseille Uprising (i.a. in the attack onto prefecture which started the uprising), she was wanted by Gestapo. During the war, she lost her entire close family. She returned to Poland in 1946. She was a co-founder and director of the Military Photography Agency (WAF, 1946-1948). As a photojournalist, she cooperated with such magazines and periodicals as Chłopska droga or Żołnierz Polski. In 1946, she produced an invaluable and stirring reportage on the pogrom of Jews in Kielce (most of the photographs did not survive). In 1948, she photographed the World Congress of Intellectuals for Peace that was held in Wrocław. Nevertheless, her main interest after the war were still social issues. Starting with the 1980s, Pirotte’s works – mostly those from occupied France – were shown by several institutions and museums in Poland and abroad (Arles, New York, Charleroi, London, Stockholm). The most selection of the photographer’s body of work enriches the collections of the Jewish Historical Institute in Warsaw and Musée de la Photographie in Charleroi.
(Written based on the biography prepared by Urszula Fuks, Dokumentalistki. Polskie fotografki XX wieku and the catalogue Julia Pirotte, Twarze i dłonie/ Faces and Hands)

Covid-19: Due to the epidemic situation of Coronavirus, the Exhibition opening will take place between 4 p.m. and 9 p.m. The number of visitors present at the gallery at the same time shall be limited and this might extend the waiting time to enter the gallery. We kindly apologize for any inconvenience.

We would like to invite you to the curator-guided tour on 29 Sept. 2020, at 6 p.m.
The tour will be translated into Polish Sign Language. The event is organized within the Culture Without Barriers Festival.

The entire program of events accompanying the Exhibition will be available on the Archeology of Photography Foundation website (www.faf.org.pl) soon.

Photograph by Julia Pirotte, A group of Jewish partisans, France, near Gardanne, 1944

Digitalization and works on the collection of Julia Pirotte’s photographs were co-financed by the Ministry of Culture and National Heritage.

The exhibition was co-financed the City of Warsaw. 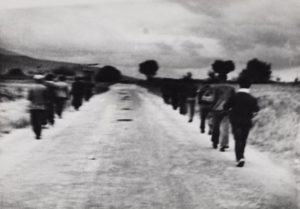