Alice in Wonderland at Asymmetry Gallery

Alice in Wonderland is a cult series of staged photographs produced by photographer Tomek Sikora and graphic designer Marcin Mroszczak. Realized at the turn of 1978-79, the project consists of twelve large-scale black and white photographs, colored by airbrush, illustrating twelve selected chapters of Lewis Caroll’s book. Work on the series, with the exception of three photographs taken at the Polish Television studios, was carried out entirely by the artists’ own means, with the help of friends, on a self-constructed set with hand-made costumes and make-up. Carroll’s book was closely related to the interests of both artists who at that time worked, amongst other things, on theatre and film posters – the illustration series was a means of “escape from socialist reality” and into the world of unfettered imagination. “The most important thing” – said Tomek Sikora – “was that falling into the hole Alice discovers a reality where everything is possible”. Surrealist in tone, the works convey the character of their literary original, at the same time breaking with conventional book illustration of the period. Alice in Wonderland was presented at the 1980 Youth Biennale in Paris, and many other exhibitions in Poland and abroad garnered interest from audience members and critics alike. In 1982 four works from the series were purchased by the Muzeum Sztuki in Lodz.

The Asymmetry exhibition brings together ten original, hand-colored, 46 x 66 cm prints. Moreover, a limited edition of nine contemporary prints made by the artists will be available for purchase. The exhibition also includes the Album – a book project carried out in the late 1970s and the first collaboration by the Sikora – Mroszczak duo. The work is a reflection on the condition of society in a socialist state, presenting a range of portrait shots which come close to reportage. The binding element in them all is a young girl (Marzena Myslek), in a characteristic outfit and with an unchanging expression. The album ends with a dream-like sequence heralding the later illustrations to Alice in Wonderland.

The exhibition Alice in Wonderland/Album by Mroszczak and Sikora is part of Asymmetry’s exhibition strategy that seeks to discover and re-stage presentations important to Polish history of photography.

Mroszczak studied graphic design at the Fine Arts Academy in Warsaw in the studio of professor Henryk Tomaszewski. He completed a number of internships in celebrated European design agencies. From 1970 to 1981 he earned a name as a prolific designer of posters for films (such as Man of Marble, Man of Iron, Nikifor), as well as theatre plays: Hamlet (with Andrzej Krauze, National Theatre, Warsaw), One Flew Over the Cuckoo’s Nest (Powszechny Theatre, Warsaw), The Wedding, King Henry VI (Stefan Jaracz Theatre, Lodz), Hamlet, Stalemate, Scapino (Raamtheater, Antwerp). Towards the end of the 1970s he collaborated with Tomek Sikora in work on illustrated artist’s books. In 1981 his work represented Poland at the Biennale of Modern Art in Paris. In 1984 Macmillan Publishers named him among the greatest designers and architects of the 20th century.

During martial law he lived in Belgium where, having gathered experience in the field of advertising, he opened his own agency, he was also a lecturer at the Fine Arts Academy in Ghent. On returning to Poland he became a co-owner and creative director of the Corporate Profiles agency (currently the Warsaw branch of DDB), one of most acclaimed Polish advertising agencies. The campaigns he developed (Lotto, Ikea, Lot, Tyskie) received numerous awards at Polish and International advertising festivals. In 2001 he was jury member at the Cannes festival. He was head of the jury at the 20th International Poster Biennale.

At the age of 22 Sikora left Poland for Paris where he worked at Kodak labs. He honed his technical skills as well as producing advertising materials for the company. Returning to Poland in 1971 he worked for a decade as a reporter for, amongst others, the “Perspektywy” weekly (1972-1981). At that time he also designed theatre and film posters, illustrations, album covers and calendars. He cooperated with leading graphic artists (among them Andrzej Krauze). At the end of the 1970s, along with Marcin Mroszczak, he created the photographic series Alice in Wonderland which, along with an earlier work Album, was presented at the 1980 Youth Biennale in Paris. In 1982 he left for Australia where he lectured at the Victorian College of Arts amongst others, and established his photographic studio working for the largest local advertising agencies. Twice, in 1991 and 1992, he was named Australia’s best advertising photographer.

In the second half of the 1980s he traveled extensively working in the U.S. and Asia. Alongside his commercial practice he worked on artistic projects, including a limited series of illustrated children’s books and calendars. Since 1996 he has been living and working in Poland and Australia. In 1999 he started work on the project “The Transparency of Things”, exhibited in galleries in Poland and abroad. In 2001, along with Andrzej Swietlik, he founded Bezdomna Gallery which promotes independent photography. From 2002 he has been a lecturer at a number of photographic schools in Warsaw. 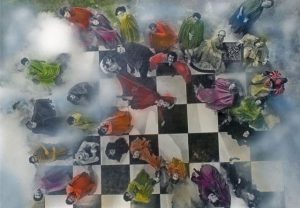