We would like to invite you to the opening of Tadeusz Sumiński’s exhibition which will take place on the 7th May at 6pm. It’s the first exhibition from the series Ambiguous Warsaw. The series, devoted to post-war photography of architecture, aims to expose the Warsaw-related activity of three authors tied to the Foundation: Tadeusz Sumiński, Maria Chrząszczowa, and Wojciech Zamecznik.

The photographs by Tadeusz Sumiński (1924-2009), who was recognized mostly for his landscapes, include: Warsaw’s housing estates, train stations, thoroughfares, as well as cafés, neon signs, and courtyards. The exhibition consists of photographs from two periods; the first part includes pictures taken in the first half of the 1950s and 60s, when Sumiński was only just beginning his professional work; the other one shows a series from the 70s, mostly with views of housing estates (e.g. Piaski, Sady Żoliborskie, Za Żelazną Bramą, or Szwoleżerów). During that period, Sumiński, after over a decade of professional work, e.g. at the Institute of Industrial Design and the Polska monthly, was already working as a freelance photographer.

The exhibition opening will coincide with a launch of the photobook Industrial, with Tadeusz Sumiński’s photographs of industrial sites in the 1960s. The book contains texts by Marta Przybyło-Ibadullajev and Wojciech Wilczyk.

Exhibition curator: Marta Przybyło-Ibadullajev
Exhibition opening: 7th May 2014, 6pm
Open: 8th May – 22nd June 2014
Digitization of Tadeusz Sumiński’s archive has been co-funded by the Ministry of Culture and National Heritage
The Archaeology of Photography Foundation hosts cultural events at the Andersa 13 venue thanks to the support of the Śródmieście District of the city of Warsaw. 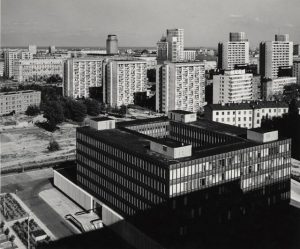