Andrzej Georgiew was a photographer who never made projects or series, and yet who left behind a remarkably coherent oeuvre. Man is central to his interest; above all, the human face. He used to say: I keep getting the feeling that I’m always taking the same photograph. Georgiew returned to the same figures many times, stripping away more and more layers. In this way, he was trying to extract this “presentness” from time and to capture it. The fruit of these encounters is a series of apparently similar photographs. Georgiew was fascinated by tiny alterations in the frames’ precise compositions. He scrutinised these differences, trying to understand what makes a shot the one to choose.

Andrzej Georgiew called his darkroom the “dark sanctum”. He worked there for many years, developing his negatives and making prints. In a natural fashion, the private space of the workshop turned into an archive full of photographs. Some were finished, carefully developed enlargements; others only samples or contact sheets. The materials he gathered piled up chronologically like archaeological strata.
The photographs in this exhibition were chosen from those we found in the “dark sanctum”. We consciously limited our field of selection to this one space, wanting to present only the work the deceased photographer developed himself. The exhibition shows what he left “on top of the pile”. As such, it presents both the images of people Georgiew captured and some of the material photographs he left behind.

The photographs were provided courtesy of the artist’s family.

The exhibition is accompanied by a Polish/English publication—the first to present the work of Andrzej Georgiew in a wider format. The catalogue is published by the Archeology of Photography Foundation.

Andrzej Georgiew was born in 1963. Until the age of 9 he lived in Sofia. Then, he moved to Warsaw where he spent the rest of his life. From the beginning of 1990s, he collaborated with press and record labels, taking photographs of musicians, actors, and writers for such magazines as “Film”, “Zwierciadło”, and “Playboy” (interviews). In the late 90s he was a member of Koalicja Latarnik which resulted in an exhibition opening the 2001 edition of Black & White Photography Festival in Zakopane and participation in Powiększenie, Fotografia w czasach zgiełku – an exhibition presented on and in the Palace of Culture and Science in Warsaw (2002). Georgiew has been associated mainly with portrait photography taken with analogue large format cameras. He died in 2016.

Michał Łuczak – PhD student in the Institute of Creative Photography at the Silesian University in Opava, Czech Republic and a graduate of Iberian Studies at the University of Silesia. In his work he mainly focuses on Silesia, coal mining district of Poland. Looking at smaller communities, and using them as a metaphor for the whole picture. Michal had published several photo books as an author and as and book editor (Brutal 2012 – self-published, Kolo miejsca/Elelmentarz 2016 – Czytelnia Sztuki Gallery, 11.41 2016 – self-published). His work has been awarded in Magnum Expression Award, MioPhotoAward, Polish Publication of the Year. Since 2010 Sputnik Photos member. Works also as a curator and photobook editor.

Jędrzej Sokołowski – photographer, graduate from the Institute of Creative Photography at the Silesian University in Opava, Czech Republic and the Institute of Art History at the University of Warsaw. He carries out long-term photo projects in which space is the focal point. Objects of his photographs include architecture, people, and cultural property. 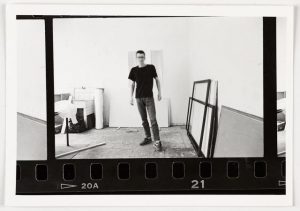