Numerous friends of Zofia Chometowska visited her at the Drucki-Lubecki family estate in Prochonsk in the Polesie region. Among them was Tadeusz Przypkowski (1905-1977), photographer, bibliophile, and sundial expert. It is said that the blue hat with suns and stars, visible in the photographs, exists to this day…

Apart from Przypkowski the photograph taken during a duck hunt depicts Chometowska herself and an unknown man from the Polesie region steering the boat. It is likely that the photograph was taken by Jakub Chometowski, the artist’s husband and an amateur-photographer.

”Our mutual friend Tadeusz Przypkowski, known among friends as the Seal [Foka] due to his black and greased hair, a man of comprehensive education and multiple successful talents, is absent. Unfortunately our beloved companion has retreated into the distant countryside, in his family land, leading a vegetative existence. Which is quite reasonable considering the current uncertain times. His wit and inaccessible sense of humor made him the organizer of parties and receptions before the war. I often used to accompany him as his partner. They would say that if one of us is missing the party is ‘good for nothing’. Those opinions were often put more bluntly.” 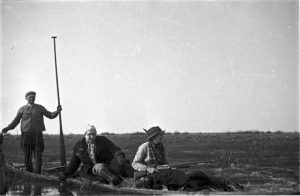