Between the document and the experiment

Karolina Ziębińska Lewandowska, Between the document and the experiment. Photography in Polish photographic periodicals 1945-1989
Anyone who was engaged or interested in photography in the times of the People’s Republic of Poland is aware of the importance of magazines, next to exhibitions. Titles such as Fotografia or Obscura were analogical to Literatura na Świecie in the field of literature or Teksty in philosophy and linguistics in that they updated their readers with the most exciting currents in Poland and abroad in their respective subject matters.
The richly illustrated book by Karolina Ziębińska-Lewandowska presents the most interesting examples from the areas of critique and post-war photography. The author discusses the avant-garde wave after the end of WW2, conflicts over the status of socialist realism, analytical photography (‘photomedialism’), the question of abstraction in photography, the impressive growth of photoreportage, and how all of these phenomena were described. This publication fills the gap in the coverage of the Polish photography in the times of the People’s Republic of Poland.

Curator and historian of photography. For many years, she has worked at the Zachęta National Gallery of Art, later she co-founded and presided over the Archaeology of Photography Foundation during the first five years of its existence. She has curated numerous exhibitions, including: She-Documentalists – Polish Women Photographers of the 20th Century (Zachęta 2008), Allan Sekula. Polonia and Other Fables (Zachęta 2011), Krzysztof Pijarski’s JL-KP (Fotohof, Salzburg 2013). She has also authored or co-authored tens of books on photography, including: The Chroniclers – Zofia Chomętowska and Maria Chrząszczowa. Photographs of Warsaw 1945-1947 or Zbigniew Dłubak. Body Structures. In March 2014 she started working as a curator at the Photography Department of Centre Pompidou in Paris, where she works with Clément Chéroux, one of the most interesting French critics of photography. 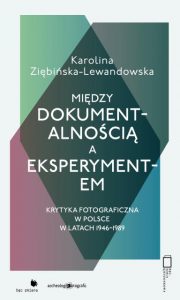