In the years 1930-1952, Serving as the inspector of the Warsaw University Botanic Garden, Roman Kobendza, Sc.D. systematically photographed groups of plants in successive sections of the Garden. The resulting negatives, each labeled with the name of the species and a date, amassed in several boxes marked with an almost calligraphic writing, represent a contemporary herbarium. The reasons behind Kobendza’s project, however, remain unclear. Were all the photographs to serve as material for scientific research and illustrations for publications and guides to the Garden’s vast collection of flora that were published throughout the 1930s? Or perhaps the photographer hoped to capture the image of the institution in that period? Or strove to express the irresistible inner urge of a botanist who could use the method of photography to immortalize the most fascinating of specimens?
So far unknown to the wider public, this collection of glass negatives has been “removed” from the archive and interpreted by contemporary photographer Basia Sokołowska, whose own practice is marked by frequent reference to the origins of the use photography in botany and reflects on various techniques of the representation of nature.
Developed over many years, the collection of Roman Kobendza’s photographs gives an account of confronting photography as a medium and an attempt at arriving at an adequate method of depicting flora. While Basia Sokołowska’s conscious exploration of the realm of plants by means of successive sunprints and drawings of selected species reveal the aesthetic implications of scientific documentation. By bringing together negatives by Roman Kobendza and works by Basia Sokołowska in one of the sections of the Botany Garden, this exhibition offers a new reading of normally inaccessible scientific photography in an intriguing visual context.
The exhibition is accompanied by a publication titled Botanical Notebook and a workshop program exploring the relations between botany and photography.
The project was prepared in collaboration with the Warsaw University Botany Garden.
Botanical Archive is part of the Living Archives Program and is financed by the Ministry of Culture and National Heritage of the Republic of Poland and BRE Bank Foundation. 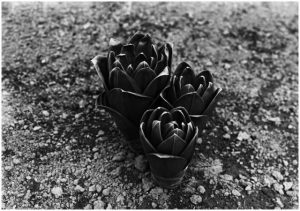