To celebrate the Year of the Avant-garde 2017, Archeology of Photography Foundation is exhibiting a selection of Zbigniew Dłubak’s iconic photographs from 1947-1950 for the very first time. In the exhibition Dłubak’s works are juxtaposed with the contemporary series by Basia Sokołowska titled Equivalents 2017. The exhibition is part of Living Archives, a current series of events organised by the APF, opening up the oeuvre of acclaimed artists to contemporary interpretations.

Dłubak started photographing in 1946, during his stay at a tuberculosis sanatorium in Otwock. In the following years, he made his most famous photographs, whose titles came from Pablo Neruda’s poem The Magellan Heart. These images were shown at Dłubak’s first solo exhibition at the Young Artists’ and Scientists’ Club in Warsaw in June 1948, and later, in December of the same year, as part of the selection for the 1st Exhibition of Modern Art in Kraków. The photographs were the first significant statement of the artist, who was involved in forming modern art language in post-war Poland. Marked by a strong reference to surrealism the images incorporate juxtapositions of sharp and blurred visual areas. Balancing on the border of abstraction and figurativeness, the images reveal interesting and unknown aspects of reality.

The series by Dłubak and Sokołowska were made seventy years apart. Equivalents 2017 refer to Dłubak’s works as well as the history of photographic abstraction, in particular the relationship between photography and painting. The title chosen by the artist echoes the series of pictures of clouds by Alfred Stieglitz titled Equivalents made in the 1920s and 30s, which are regarded as the first strong statement in photographic abstraction. His work on that series coincided with the period of an intense creative exchange between Stieglitz and his wife, Georgia O’Keeffe, whose artistic practice is also an important reference for Sokołowska’s art.

In a similar fashion to Dłubak’s photographs, Sokołowska uses a limited ‘palette’ of mid-tones, as well as introduces blurred imagery, closely observing equally intriguing, organic matter. The billowing ‘clouds’ emerging from the shadow assume an uncanny, existential tone (which is also present in her previous works). Equivalents 2017, celebrating Georgia O’Keeffe belong to a larger body of work which the photographer has been working on for the past few years titled Tribute and dedicated to artists who are important to Sokołowska. The previous chapters of the project referred to the art of Anna Atkins and Louise Bourgeois. Here, the references are made with a visually imperceptible sense of humour. What one sees in the images is photographed fur of Manczu – the artist’s chow chow – which was also Georgia O’Keeffe’s favorite breed.

The juxtaposition of works by Sokołowska and Dłubak poses a questions about the place of abstraction in contemporary photography as well as the possibilities and the validity of its language.

The project has been co-financed by the Capital City of Warsaw. 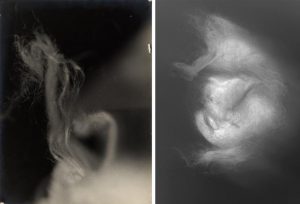