One of the characteristic features of contemporary culture is the constant development of a field of phenomena produced as a result of the inertia of artistic media, the blurring of boundaries between them, and their mutual interplay. At the same time, spectators take on the role of artists increasingly easily, entering into a complex network of reactions to stimuli provided by objects of culture. Today we are both witnessing and actively contributing to the acceleration and fragmentation of the system of culture. And it is for this reason that we find attempts at redefining the limits imposed by its artifacts easier than ever. By means of constant reinterpretations, deconstruction, and shifting of contexts, we dissociate these objects from their original positions and origins. Caught in a fast forward motion, they become something else. This motion, seen by the (broadly understood) witness / author takes the shape of internet memes, remixes, quotes, or parodies. In every single case, the objects are subject to an almost economical regime of gains and losses—losing a fraction of their original meaning for the sake of a fraction of new context.
Similar strategies, aimed at opening a gap between the object and its meaning, are at play in the works featured in Artificiality. The artists, each in their own distinct way, address and transform that which already exists—developing works that are novel in character and independent of references to the original art objects. At the same time, they adapt the grassroots processes found in contemporary culture, implementing them in a dialogue with selected works of art. This exchange, however, is never servile. Rather, because of the distance that emerges in the process, it comes close to irony, therapy, or even almost scientific examination. The rift in question takes place as a result of various processes, among them photography, that has, since its invention, served as a key index of reality. The works on view are an attempt to examine a range of diverse phenomena that, while focusing on the image, draw the viewers’ attention to that which was originally not part of reality but was artificially created. In this way we find repetitions of gestures that have earned their own place in art history (Karolina Breguła), an almost physical struggle with the photographic canon (Michał Jelski), and even a quest for abstraction that emerges in the architecture of an art museum (Krzysztof Pijarski). Thus, the common point of departure is working with that which is artificial. Artificiality does not present anything from beyond the realm of the produced, at the same time, it offers a glimpse of its mechanisms and the way it gradually renounces the real and the primary. The attained distance also invites questions concerning our own existence among that which is artificial. 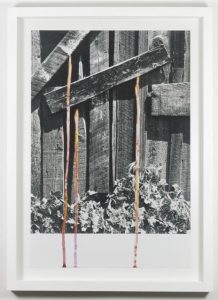