We invite you to the opening of the exhibition COLLAGE. DEHUMAN with works by Filip Tofil, which will take place on October 30 (Thursday), 7pm.
Everything has already been done. Deconstruction, fragmentation, multiplication, humiliation, or even abuse, of body. The tradition of collage reaches back to the experiments carried out by the Dadaists, Surrealists, and Pop artists. In spite of that, both the theme and the form continually help to broaden the artistic horizons – not only due to the technical and iconographic possibilities (the latter of which manifest themselves in the endlessness and accessibility of the iconographic collections, such as photo archives and library collections), but most of all thanks to the ubiquity of body in visual culture. The exhibition is open until November 7.

The exhibition Collage. Dehuman revisits these fundamentals, toying with both the technique and subject matter. The exhibition will comprise almost twenty collages by the young Warsaw-based artist and designer Filip Tofil. This set of works is based on the human being, or, more precisely, his or her lack or absence. The artist is interested in the limits of perceiving a human figure as reduced to an icon, by means of removing the fundamental subject of his works, i.e. a man. He achieves this effect by leaving only the outline or individual parts of the body, which gains a new meaning. In this way, the human figure becomes a collection of graphic forms, appearances, colours or objects that fill it out, while the human itself disappears from such representation. This procedure raises a question about the limits of a man’s recognisability, in the context of the contemporary pictorial language, the diminishing necessity of writing and widely disseminated infographics.  Dehuman refers to projects that are concerned with deformation and elimination of the internalized symbols of a hand, leg, hand, head, buttocks – shapes that are unequivocally associated with human body.

Artist, graphic designer, and a co-founder of the design group SYFON STUDIO. He has taken part in numerous exhibitions of graphic design, such as Designing Polska-Design in Poland, organized at The London Design Festival. In 2012, he won the competition Zamecznik NOW, organized by the Archaeology of Photography Foundation. His works are included in the collections of the National Museum in Poznań and MAK – Austrian Museum of Applied Arts/Contemporary ART. 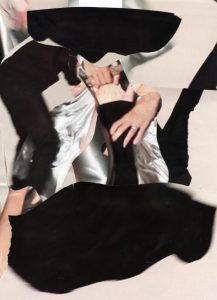