In the course of research on Zbigniew Dlubak’s archive the Foundation extended an invitation to Krzysztof Pijarski, photographer, art historian and critic. Setting out to document the collection in photographs, Pijarski followed his own interpretative threads. In researching an archive, documenting a state prior to ordering, segregating, classifying, and distributing, etc. is of utmost importance.

Such documentation however, need not necessarily have a working character of work. It can be an intellectual and visual adventure. Such is the case with Pijarski, who leads us through marginalia to which he also ambiguously refers as “sources”. On the one hand, these consist of source materials for the artist himself (materials from the history of photography, reproductions of artworks, notes from lectures). On the other hand, archive papers, which testify to the broad range of Dlubak’s interests and fascinations, not only in the field of art, constitute a source for the researcher. Pijarski traces diverse threads within this set, with varying intensities, regulated by subjective sensations rather than the rigorous logic of historical research. Pijarski indulges in seemingly unimportant material that appears marginal from the point of view of Dlubak’s core of work. It is precisely this that offers an alternative look at both the artist’s oeuvre and his whole archive. 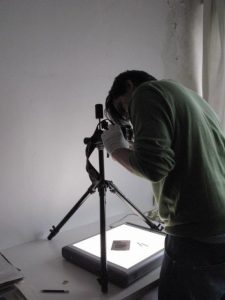