We are pleased to announce another event taking part through the Living Archives project: the exhibition Jerzy Lewczyński / Krzysztof Pijarski. Playing the Archive Game is an attempt to reinterpret the archive, but also the entire oeuvre, of photographer Jerzy Lewczyński. At Galeria Asymetria we are showing Jerzy Lewczyński’s (b. 1924) photographic series Face-Pulling Skirmish and a new work by Krzysztof Pijarski (b. 1980), titled JL – KP, which is an attempt to confront the larger figure of the Gliwice-based artist and the archive he has amassed over years. The exhibition is on from 17 June through 31 July 2011. Opening hours during the summer season: Monday-Wednesday 11.00-17.00, Thursday 12.00-19.00.

Invited by curator Rafał Lewandowski, photographer and art historian Krzysztof Pijarski has engaged in an artistic dialogue with Jerzy Lewczyński, emphasising the element of humour and play, very characteristic for Lewczyński’s work and yet often ignored. He has also performed research work, presenting, in an unorthodox manner, various iconographic and symbolic motifs present in the work of the Gliwice-based classic photographer. Some 150 rephotographed images, selected by the two artists from Lewczyński’s archive, have been arranged on panels that bring to mind Aby Warburg’s Mnemosyne Atlas. Some of those are very well known images, others are souvenir or found photos, and there are also many previously never-shown or never-published photographs. Arranged in groups, they generate a movement of meanings and associations, blurring the worn paths in the interpretation of Lewczyński’s work. The exhibition is accompanied by a film showing the two artists’ conversations about photography. 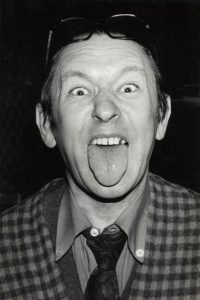