Anna and Krystian Jarnuszkiewicz met in 1952 at The State Academy of Fine Arts in Wroclaw. She was studying painting and he was studying sculpture. After they had finished university, they lived together ever after and worked – although separately sometimes, always in a constant closeness which lasted over 50 years and was ceased by Krystian’s death in 2016. These events constitute scenery of their common journey and build the perspective through which the vast selection of works presented within Love Story exhibition should be perceived and understood.
The exhibited photographs do not include all the aspects of their artistic activity; for instance they neglect drawings which – at some point – became the most important form of Anna Jarnuszkiewicz’s artistic expression. Love Story focuses on spatial objects: sculptures, stage design projects and monuments, and therefore those forms of artistic work which depiction and documentation allow a specific language of photography to work its best.
In this very selection of works it sometimes adds – by showing spectators how a sculpture might function and be perceived in a public space (most often it relates to the Vistula River escarpment near Jarnuszkiewiczs’ studio located in the Warsaw New Town area), by monumentalizing or transforming it. But it also deducts – the experience of the scale, the sound of the wind, the fragrance of blossom trees, the warmth of sunrays and the severe frost of Warsaw winter.

But should these photographs be included in Anna and Krystian Jarnuszkiewicz’s artistic body of work? Is this question relevant at all in the context of their artistic endeavor?

Photography archives of artists often evoke a specific sensation of desire; they stimulate the eye and the mind of those, who encounter them. And in this very case, the artists became not only the authors of projects depicted in the photos, but also the authors of the photographs.
These pictures – also the ones presenting the artistic process of searching for the sculptural forms – were taken for their own use, in the private space of their studio and have never been published or exhibited. Such a vast collection photographs is being presented to the public for the first time.

The dimension of voyeuristic experience in its modest version – in the context of this archive – is conveyed by two photo installations by Nicolas Grospierre
Spatialization of Anna and Krystian Jarnuszkiewicz’s Photography Archive. Spectators with their sight attracted by the hole in the box with photo projection might almost physically experience the fascination evoked by the image, ‘an approval of life up until death’ (G.Bataille).
Viewers perceive what is distant to them as something very close, remaining in the impassable detachment. They experience sculptures, stage designs and monuments in a mediated way. Today lots of them are impossible to be experienced spatiotemporally as they have been destroyed, the landscape, in which they were located, does not exist any longer, stage designs were disassembled and monuments – often groundbreaking – were never constructed; what remained are entirely their photo reproductions. The mystery seems to be as persistent as the love between the two artists.

Digitalization of Anna and Krystian Jarnuszkiewicz’s archives is co-financed by The Ministry of Culture and National Heritage. 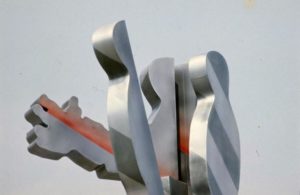