Archeology of Photography Foundation is happy to invite you to yet another chapter of the Living Archives project, within which the contemporary artists work with the historical photography collections, enriching them with their own, new interpretations.
For several reasons the new exhibition is different to the previous ones – Magda Franczak, an artist invited to co-operate with the Foundation, has decided to reinterpret the collection of anonymous portraits which belong to the Jewish Historical Institute. Almost 500 glass plate negatives, originating from 1930’s, have been organized, preserved and digitalized by Archeology of Photography Foundation in the collaboration with The Jewish Historical Institute, and were made available within The Virtual Museum of Photography.

Little is known about this unique collection – neither the names of the photographed people, nor the author of portraits have been identified. Negatives, brought to The Jewish Historical Institute years before, perhaps got there for a reason – the person who handed them over must have been aware that this institution takes care of the Emanuel Ringelblum Archive as well as other legacies of Jewish life from before 1939 and after the Holocaust. And thus, the place the collection came from determined its interpretation. It was presumed that at least a significant number of the portraited people had been of a Jewish origin. Most probably majority of the individuals photographed in 1930’s did not survive the next decade.

The core of the exhibition constitutes anonymous portraits; their history emerged from the tiny bits – not only of information derived and understood from the details depicted in the photographs, but also from the fragments of glass plate negatives, which had been put together in the process of restoration.

This exceptional collection has been interpreted by the photographer, the sculptor and finally, the founder of nomadic workshop and the designer of artistic books. She has decided to build the exhibition around the Broken Column sculpture, which was created during the exhibition in Jerusalem in 2017. Franczak constructed the column out of ceramic vessels, brought to the gallery by accidental people, most often strangers. After the exhibition had finished, parts of the column were packed – wrapped in newspapers and cling film. They also received numbers, archeological findings alike. Then, between September 2017 and May 2018 – courtesy of several people – as single items, in pairs, in suitcases, as hand-baggage, the sculpture – part by part – was brought from Israel to Poland. Only three elements went walkies.
Apart from the amazing column, which – against its original purpose – does not support anything, there will be also presented a series of collages made by the artist.
Escheat – according to the English dictionary – is a heritage which is left by those who died intestate and without relatives who are legally entitled to inherit in the absence of a will. It is left by those, who had neither descendants, nor heirs. In this very context the collection of negatives is this kind of an escheat. However, Franczak does not appropriate it, she does not take control over it unlawfully. Neither does she serve as its curator or guardian – this role is fulfilled by the institution, the Jewish Historical Institute. The artist focuses on building up the history of this archive, she gives it a shape, indicates the void in it, and fills it up with present. She emphasizes that in both collections – ceramic plates, bowls and cups as well as in glass plate negatives – the most important actors are people. She describes her project as it follows: This exhibition is about emptiness, vacuum, about migrations and meetings. In this symbolic way the living brought the vessels for the portraited ones, locating them in the material world, seating them around an invisible table in the old tenement house in 20 Chłodna Street.

During the time of the ‘Escheat’ exhibition, in the building of the Jewish Historical Institute, 3/5 Tłomackie Street in Warsaw, there will be presented an exposition of the prints from the anonymous collection of glass plate negatives, which constituted the initial point for the exhibition curated by the Archeology of Photography Foundation.

The exhibition is co-financed the City of Warsaw. 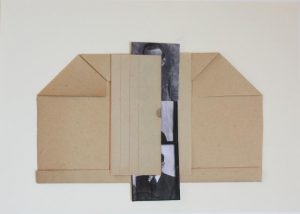