The cover of the Shoes and Accessories catalogue published in 1954 by the Warsaw Institute of Industrial Design (IWP) features open-toe sandals and a wicker-and-canvas handbag. Just as modern design and local traditions are merged today, so, it turns out, they were under real socialism. The comprehensive catalogue text discussing the summer collection prototypes suggests that the designers sought not only functionality of form but also economically viable and hygienic solutions. Behind the text’s ideologized language stands a product-design philosophy that sounds surprisingly modern and fresh today.

At the very beginning of a relatively brief period of political liberalisation known as the Thaw, the IWP launched a research-and-development programme aimed at maximising the utilisation of resources, hence, for instance, a series of leather-patchwork sewn bags and briefcases. During an era commonly seen today as rather coarse in fashion, designers developed patterned-fabric lightweight sandals, stressing the benefits of using natural and local materials and trying to adapt them for mass production, as demonstrated by a unique material by photographer Maria Chrząszczowa (1913-1979), recently discovered within an archive currently researched by the Archaeology of Photography Foundation.

The series of catalogue photographs shows prototypes of shoes and bags, including felt and paper maquettes, shoemaker’s last models and sole patterns, and fabric samples. The designs had been created by Wanda Piechal, Maria Serafin and Ewa Zielińska for a studio run by Józef Pfeiffer, Maria Chrząszczowa’s father, coowner of the famous prewar tannery Bracia Pfeiffer. The catalogue was co-published by the IWP and the Sztuka publishing house as part of the series ‘New Product Design’.
Chrząszczowa’s photographs appear as routine documentation, each item pictured twice at different exposure. The 35mm films were cut into four-frame strips, each fragment contact-printed, the prints glued into matching-size envelopes – a total of 130 such jackets in the archive. Also documented was the autumn collection, altogether some 250 items. The photographs were used at product design and implementation stages as well as for publicity purposes.
The exhibition prepared by the Archaeology of Photography Foundation presents a selection of images from the large collection. It can prove highly inspiring today for, besides their sentimental value, many of the designs look definitely contemporary. Felt boots are one of the highlights of the latest collection from Camper, and the most popular sandal model sold by Vagabond is very similar to Ewa Zielińska’s design which, according to J. W. Marek writing in the catalogue, was inspired by the footwear worn by Roman legionnaires as well as the traditional sandals of the Masurians. 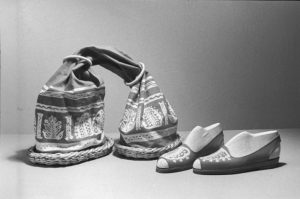