Mariusz Hermanowicz’s work focuses on some crucial and recurring threads. Its central place is taken by the interest in people. Observing them in various situations and telling their stories through applying a vast spectrum of photographic conventions are the motives which are present in every period of his artistic endeavor. Starting with photojournalism and finishing with studio photography, Hermanowicz showed their struggle with daily routine, but also elusiveness and randomness of encounters, fragility and precariousness of what is physical. Protagonists of his photos were accidental strangers, but also very close people and finally he himself.
The second returning theme is the passing time, evanescence and reflection on the unique value of every single moment. Photography served him as a vehicle through which he was able to search for what’s gone, a tool with which he could inventory traces, but also a medium, he used to regain and reclaim memories. Very often the image appeared not to be sufficient and because of so some photos are enriched with handwritten notes. Sometimes he wrote just one sentence, on other occasions – used more elaborate narration. These works are full of irony. However, there is often a nostalgy beneath.

At the end there emerge the third aspect present in the artist’s work: his passion for telling stories. They were often related to the surrounding world, at times they focused on his own experience. Those visual narrations consist of a few dozen of photographs in some cases and had been built for a number of years. This way Hermanowicz created a style, which made him a distinctive and recognized artist among Polish photographers.
The vast artistic legacy of Mariusz Hermanowicz can be read in several ways, and the spectacular amount of works – since 2015 analyzed and described by The Archeology of Photography Foundation – evades simple generalizations. The exhibition ‘What might photography be used for?’ is focused on presenting shifts and alterations which could be observed in the artist’s work. The process of transformation and evolution of his ideas might be tracked starting with the early period which could be described as a journalistic one, through the emergence of style based on photojournalism combined with conceptual art, the stage of concentration on reconstructing his family stories and finishing with the phase, the artist himself called ‘A New Stage’, and which, unfortunately, became the last period of his artistic work.
The exhibition presents those curial moments of subsequent shifts as well as characteristic points such as the emergence of notes below the photos and then – their gradual disappearance, passing from the photojournalistic style towards more conceptual art, development of the idea to work with the extensive photography series and setting a number of works within the author’s biography.
The last part of the exhibition constitutes a sequence of images from the last period of the artist’s work, which is characteristic for the abandonment of the themes present in the former phases, rejection of the formal solutions he used and entering the photo studio. Exposing the variety of threads and diversity of Hermanowicz’s works is aimed at presenting the artist unique approach, but also taking a closer look at how he used photography and what it might have served him for.
The exhibition presents several dozen of authorial prints, including works from popular series as well as photographs which have never been shown before.
The exhibition is complemented with the catalogue ‘Someone, (that) I do not know’, published by FAF on this very occasion. 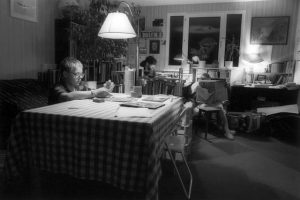