Poland on the road

In 1936, Zofia Chomętowska won a competition for the position of a staff photographer of the Ministry of Transport’s Department of Tourism. Her job was to document tourist attractions throughout the territory of the Second Polish Republic. Displayed in public places, e.g. at train stations and inside train cars, the photographs were meant to encourage citizen mobility, stimulate tourism and promote a positive image of the country; their role was thus primarily propagandistic. However, as usual in Chomętowska’s case, the collection, miraculously preserved in her archive and only recently brought to Poland by the APF, is far from being homogeneous. Combining official images with seemingly private ones and stately landscape documentation with a keen sense of humour, it offers a unique portrait of the daily life of pre-1939 Poland.
The Foundation’s work on the photo book, Zofia Chomętowska: Poland. On the Road, is nearing completion. The 400+ page book will present largely unpublished material, recently discovered in the photographer’s archive and originally created for the pre-WWII Ministry of Transport of the Republic of Poland. 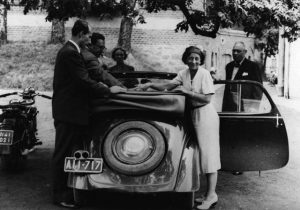