Restaurant - Now Available at the Foundation

It is our pleasure to recommend a book recently published by the Foundation: Restauracja / Restaurant by Julia Staniszewska and Mikołaj Łoziński is available in two language versions Polish and English.
Restaurant, by writer Mikołaj Łoziński and photographer Julia Staniszewska, brings together three stories: that of the fall of a restaurant in the suburbs of Warsaw that saw its glory days before 1989; that of the fall of the family that used to run it; and a fragment of Polish history – the transformation from communism to capitalism.

The tale, set on a Christmas eve in the building of this famous restaurant with no heating, is narrated by its founder Karol. Although dead for 30 years, he never left the place he established in the early 1950s.
Karol recalls the former glory of the restaurant which, before 1989, was bustling with sportsmen, artists, scientists, and members of the political opposition as well as high-ranking government officials. The future of the country was often decided nowhere other than here. Perhaps in one of its cozy wood-paneled rooms photographed by Staniszewska, officials resolved that Polish troops would enter Czechoslovakia in 1968, or even made the decision to introduce martial law?
The restaurant’s founder is also willing to speak about his relatives, recalling how once a year the discordant family gathers around the Christmas table in the empty restaurant. He wonders how it was possible that they destroyed one of the most fashionable restaurants in the city. And how it was possible that the restaurant destroyed his family. See gallery>>>    Read a fragment>>>

Julia Staniszewska (b. 1978), artist working predominantly with documentary photography. Her photographic series include Inhabitants of Bryly St., Louvre, Warszawa niecentralna (Warsaw Non-central), as well as the book Paryż-Warszawa 24 godziny bez przerwy (Paris-Warsaw 24 hours non-stop). She graduated from the Multimedia Department at the Ecole Nationale Supérieure des Beaux-Arts in Paris. In 2001-2005 she collaborated with the collective “Des territoires”. She has lived and worked in Warsaw since 2005. 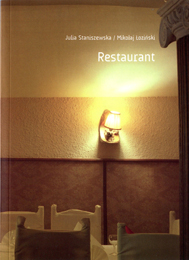