Two different approaches to the human body, two extreme perspectives, a polarized experience of the body and two completely different contexts come together in the photographs by Szymon Rogiński i Zbigniew Dłubak.
The series Wir In Dresden by Rogiński and Systems – Gesticulations by Dłubak differ in just about everything except the fascination with the naked body and its photographic representation.

Before deciding to explore photography, Szymon Rogiński was a student at the Derevo Theatre’s School on Wheels, where work with one’s own body serves as the basis for actor training, shows, and performances. There, in the course of intense interaction and physical exercise in close proximity to other actors, the intimacy of another body and physical contact were tamed, neutralized, and stripped of eroticism. This tamed nudity became a natural state for the group of actors, while the male and female bodies were brought to an equal level – beyond the masculine culture. The series  Wir In Dresden, featuring Rogiński’s friends frolicking in the stormy waters of the North Sea, conveys this state: the freedom of the body and the freedom brought by nature’s element; ease and expression and, at the same time, a certain softness of the photographs, their slightly dreamlike character.
Expression of this kind is confronted with the rigor of the series of photographs by Zbigniew Dłubak who, photographing models in his studio in the 1970s, followed a strict set of rules and an almost scientific approach. Photographed against a black background, the naked female chests repeat a sequence of gestures based on a number of rigorous, mathematical patterns. But, can the human body, can the body of a female, be so “mathematical”? Combinations of models reveal differences, and bodies do not lend themselves easily to cool calculation. Human body is not an object and cannot be objectified. The chests belong do specific individuals, we see birthmarks, and – in the Summer – marks from bathing suits, some are more thick, while others are more slim – all this can express just as much as one’s face. Dłubak’s project, for which he amassed thousands of negatives, is not about gestures. Rather, it speaks about the female body inscribed into a system – in this case, the system of art, but also the system of culture and a set of codes. At the moment of making, Systems – Gesticulations and Systems – Collection were conceived as statements about sign. Today, they can also be seen as tales about the female body.
The exhibition features photographs by Szymon Rogiński and a series by Zbigniew Dłubak, set in motion by Rogiński by means of digital animation, combined with working photographs for Dłubak’s meditative work Ocean. The show is the result of Szymon Rogiński’s investigation into the archive of Zbigniew Dłubak and is part of Living Archives series.
Curated by Karolina Lewandowska
Szymon Rogiński      see bio>>>
Zbigniew Dłubak    see bio>>> 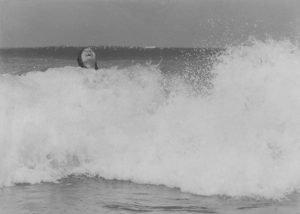