That Which Doesn’t Die, Does Not Live - new exhibition

An “ordinary” death is less and less present in culture. People don’t die in the presence of their families, but in hospitals; a coffin with a dead body is not held at home for three days, but instead the relatives visit the deceased in a chapel. According to the cultural anthropologist Joanna Tokarska-Bakir, “contemporary culture, with its cult of youth, if not immortality, is scared stiff of death […] The world, which doesn’t believe in any truths anymore, which perceives everything as a mask and appearance, defends against this most inevitable of truths in any way it can.”

Archeology of Photography Foundation and WIDOK Association of Cultural Education cordially invite you to the exhibition That Which Doesn’t Die, Does Not Live, which features archival, previously unpublished funeral photographs. They are archival not only because they were taken before or right after Second World War, but also due to the fact that nowadays hardly anyone takes pictures of the deceased or the mourners.

The exhibition will include photographs by Bolesław Augustis, an interwar photographer whose oeuvre is still being discovered. His collection, counting several thousand frames, found by accident ten years ago, is the richest photographic documentation of the 1930s Białystok.

Bolesław Augustis ran the POLONIA FILM studio in Białystok. He was an artisan, but besides doing commercial photography in his atelier, he also went out to the streets where he closely observed the urban life. He was also commissioned to do special photo shoots, including funerals. Pictures of processions, caskets pulled out through windows, or funeral guests constitute a documentary record of the interwar period.

The exhibition also features photographs by Jan Siwicki, a rural photographer from Jaczno near Białystok. In his case, less than 300 glass negatives have been preserved out of several decades of work. Siwicki photographed his life in the countryside which revolved around births, weddings, and funerals. The latter are probably of greatest significance. It was important to record the image of the dear deceased, as memory can fail.

Today, photographs by both authors show how much our customs related to sending off the dead have changed over the course of less then a century. Death used to be something natural and people were accustomed to it, especially in the countryside. This is why a photograph with children smiling next to a coffin, or resting their hands on it does not surprise. In group portraits, mourners are genuinely moved, but also calm and resigned to death.

Neither Augustis nor Siwicki took funeral pictures out of an artistic or philosophical urge. Hence their authenticity. They are devoid of any conceptualisations. When looking at them now, one may ponder this great climax, which reaches every matter and seals it.

curator: Grzegorz Dąbrowski
The production of the exhibition was financed by the Podlaskie Voivodeship Marshal’s Office 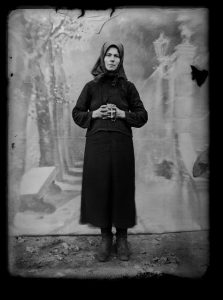