It is the aim of the archeology of photography to search for witnesses of past events! In the case of photography, the role of that witness is played by the light which was the stimulus for the technological processes of documenting reality and which sculpted the past common existence into the negative! The negative, then, is the trace of “that” light and an authentic witness of bygone events. This observation of the light left on the negative may be the theme of fascinating discoveries leading to the unraveling of the mystery of the sculpture of the negative.  / Jerzy Lewczyński

“Observation of the light left on the negative” — thus Jerzy Lewczyński defined the program of the archeology of photography, to which I continually return in my own artistic practice.  The photographic image — despite our desire to treat it as the finest evidence of nowness — always comes too late. Then-ness is its realm. Each photograph is a ruin of representation, not because it doesn’t provide any access to reality, but because, when faced with a photographic image, we can never tell when — and how! — we will gain this access. Photography is inherently abstract; it can be said that, when looking at a photograph, we don’t see an image of the world, but a world in its own right, which has just ceased to exist. Therefore, in order to retrieve its meanings, and not just views, from — or with the use of — photography, we should act, as it were, against the automatism of the photographic apparatus and disrupt, even if discretely, the moment of capturing the object. That is exactly why we could risk the assumption that the essence of photography resides in the archeological: all it offers us are fragments, vestigial layers, moments allowing us to start the (re)construction.

I undertook a (re)construction of two kinds of ruins — the destroyed sculptures from the collection of the von Rose family from Döhlau (nowadays Dylewo) near Osterode (Ostróda) in East Prussia, and Zofia Chomętowska’s photographs depicting Polesia, the pre-war life of the Królikarnia residence in Warsaw, as well as the ruins of Warsaw.

Even though the residues of the sculptures from Dylewo hardly deserve to be called sculptures — or art (and still, they belong to a museum collection!) — I decided to photograph them as sculpture: I separated each object from the ground, by placing it on a wooden block, as if on a plinth that situates it between the “pure” materiality of a ruin and the condition of a sign, a carrier of meanings. This is not so much about aestheticizing these objects as about rendering them sensual and suggestive (again). The plinth also stands for the return to the pre-modernist “logic of the monument” — the original connection of a sculpture to a particular place (from which it becomes dissociated, as a symbol). To me, these objects turn into negatives of sculpture, precisely as a result of this re-inversion of their status — from an object that had become a part of natural history, to one that recounts the story of a double ruination: the abrupt abolition of feudal structures and the erasure of the memory about the history of inhabiting the so-called Recovered Territories.

The place in which I wish to embed the Dylewo negatives, is described by Chomętowska’s photographs. It is the Eastern Borderlands, but not as a historical region, but as locus in the collective imaginary of the Poles; as the site of phantasmatic identification with the Sarmatist Nobility traditions. What tends to be forgotten in this process of self-identification is the bedrock of that tradition: privilege, exclusion, violence. What is “remembered,” then, is the era of real socialism as trauma, as absolute ruin, not just of that tradition, but also of that social class as a vehicle of culture. In our imaginary, this vision acts as a screen memory. That is exactly why Andrzej Leder refers to the moment of ruination of feudal structures as a “dreamt-through revolution.” The aim of my visual essay is to unsettle this dream image.

Zofia Chomętowska didn’t salvage the family silverware from her estate, but a backpack with negatives, and along with it, an image of a world that is no more. When appropriating Chomętowska’s photographs for my own visual work, I was examining the interstice between the frame and the shape of photographed prints, in search of a point at which they would materialize as the remains of that reality. In this context, all the imperfections, stains and scratches on the emulsion come across as defects in the “sculptural form” of the photographer’s negatives, which have themselves become ruins. At the same time, this interstice reveals that Chomętowska’s photographs carried a gesture of containment and hence also of exclusion; that which is not contained in them becomes equally important.

By pairing the ruins of these two incommensurable, and yet analogous orders — also on the narrative level, resulting from the juxtaposition of specific motifs — I aim to reflect on their contemporary significance.

This work was produced as part of a larger curatorial project, The Estate, realized together with Katarzyna Kucharska-Hornung, Michał Libera, Karolina Puchała-Rojek, and Jan Sowa, under Agnieszka Tarasiuk as chief curator, at the Xawery Dunikowski Museum of Sculpture at the Królikarnia Palace in Warsaw. 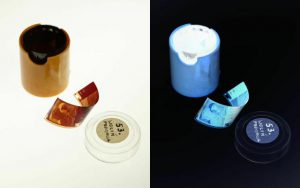