The Power of Time. Dalkia Archive

The APF is launching a new exhibition series, Phototheque: starting this year, besides authors represented by the Foundation, we will start showing interesting but little known archives from outside Warsaw. The purpose is to contribute to the charting of a decentralised map of photographic individualities. The series begins with Energy of Time. The Dalkia Archive, a collection of photographs from ca. 1922-1940 by Łódź-based documentalist Wiktor Jekimenko, which premiered at the ‘Fotofestiwal’ International Photographic Festival in Łódź in 2011. The exhibition opens on 12 March 2013 (Tuesday) at 7 p.m. Curators: Marta Szymańska (Fotofestiwal Łódź), Marek Domański.

Dalkia archives store some amazing material – documentation from the expansion and operation of the Łódź EC1 power plant, group images of its workers and photos of Łódź from the beginning of the 20th century. A vast set of glass negatives (about 2000 pieces) comes from years 1922-1940. They were all taken by Łódź photographer W. Jekimenko. Fotofestiwal took steps in initial preparation of this amazing series and selecting the most interesting photos.

The extraordinary value of the archive lies in its complexity, continuity and details. Few years of the life of the power plant were presented very carefully, allowing to recreate not only subsequent construction changes but also the lives of workers – from management to the physical workers who built the first power lines in the centre of Łódź. The author was not only a skilled craftsman and documentalist, but, most of all, a conscious photographer whose output does not fall far from the works by the most prominent artists of his time.

The Power of Time. Dalkia Archive
Exhibition is on until 30 April 2013 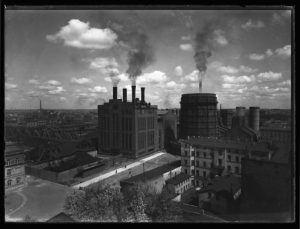