Warsaw / Lives / Ruins brings together two tales about Warsaw, or two “archeological digs” of the city. Today, the idea behind Warsaw’s reconstruction after the Second World War—as a promise of social utopia—remains largely invisible. The city’s pre-war roots are but hieroglyphs. Krzysztof Pijarski and Tomasz Szerszeń have embarked on an attempt to decipher this underlying urban grammar, and to listen in on its faint language.
Warsaw / Lives / Ruins marks the first collaboration between the two artists and scholars, who have however been engaged in a creative and intellectual dialogue for years. It is also the result of their shared fascination with Warsaw as a mirage—and an exploration of its latent, potential and imagined aspects.The exhibition features two projects: Warsaw Antiquities and The Lives of Non-Saints.

Warsaw Antiquities, by Tomasz Szerszeń, seeks to answer the question of whether or not Warsaw possesses its own “antiquities”—a question which can, of course, be related to the popular utopia of the local Socialist Realism: architecture that bears traces of its former glory as well as signs of impending decay. Did this specific form of writing preserve its utopian potential? The project aims to introduce this architecture into a new and perhaps less-obvious context of typologies and atlases of Giambattista Piranesi and Aby Warburg. If Warsaw indeed has its own “antiquities”—as did ancient Rome— then Socialist Realism seems the best starting point in the quest to find them.
The Lives of Non-Saints, by Krzysztof Pijarski, attempts to examine the issue of the demolition of monuments at the time of the political transformation in Poland. The artist is especially interested in the aspect of visibility / non-visibility—while some of them were torn down, others continue their existence while being symbolically invisible. Rather than a fascination with the aesthetics of ruins, the project stems from an interest in mechanisms of remembering and effacing that are at play in public space. It focuses on monuments and sculptures in Warsaw which replaced previous ones, former sites, and “toppled effigies” themselves, seen as the ruins of representation. The perspective of Lives is reflective and critical, as opposed to nostalgic.

Organized in collaboration with the Archeology of Photography Foundation and the Department of Culture of Praga Północ District.
Financed by the Warsaw Municipal Office for Culture. 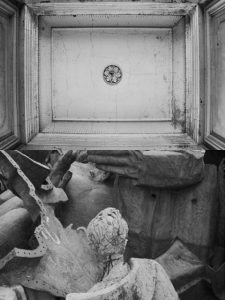