Where is the body. On Agnieszka Rayss’s project.

Or rather: what is it like and who does it belong to? Is photography able to convey shapes and structures of the body shell the same way the beautiful wax moulages do?

‘I started with collecting them” – says the photographer. University Museums within Anatomy Departments and those opened next to M.E. Office in Hamburg, the collection of Forensics Center in Wrocław – these were the areas of her explorations. She photographed body parts, internal organs and bones stored in repositories and locked away in cabinets as well as moulages, the plaster or wax models perfectly imitating surfaces of objects – in this very case those of the body and skin, which were showcased as permanent expositions.

Body parts and organs immersed in formalin – culturally uncomfortable and deeply perplexing, yet absolutely unique artifacts, hidden away from sight of the museum visitors, useless for medical students in the era of modern technologies – in the photos turn into almost entirely aesthetic objects. Rayss reaches for the tools from the area of studio photography – artificial light, monochrome backgrounds. She applies central composition and standardizes the format. In this form the bodies become visible again and they re-emerge to the spectators in the gallery, revealed and released by the artist, who – through her work – reclaims their legitimacy and justifies their presence.

Moulages are quite different. Most of them have their own place within the exposition in Hamburg museum. No longer the body but its imitation, created years ago by an artisan, almost an artist, perfectly re-creating all the skin details. The photographs taken by Rayss constitute doubly mediated depictions – they are photographic images of wax copies of the body and we learn it reading the notes below her works.

Through photography, body parts put in formalin and wax moulages – these originally distinctive objects evoking very different emotions – become equalized. The artist makes it possible for us observe both types of showpieces, similarly to the employees of archives and museums. However, in the end we look at the images printed on the photographic paper and not at the objects themselves.
In this story, bones constitute the most unobvious part. They preserve and do not require special protection against decay. Their view is also less shocking. Without relevant tests they do not convey much information – it is difficult to determine their owner’s gender, appearance or life experience. The artist indicates their distance to the concept of the body by choosing the skull bone intersection and photographing it as it was an abstract sculpture.
The ambivalent approach towards the anatomized bone models bring us back to the equally complex theme of the body. Photographers have been always trying to transfer its realistic image which resulted in standardizing the way it should look. Of course, objectification or reification of the body introduced by photography – so different from the previous representations – applied mostly to women’s bodies and there is a vast spectrum of literature analyzing the history and function of these strategies. In this context, the moment of rejection, indicated by the American art historian and critic and applied mostly by women artists, gains a significant importance. This act of rejection undermines the common codes of representing female body as a sexualized and desirable object. The artist’s inclination towards ambiguous representations of the body can be included in the history of its reclaiming and giving it agency/subjectivity. An outstandingly strong example here is the photo of a breast which lacks erotic connotations for it is an image of a dead body, actually a part of it, an anatomized model, double-preserved in time: with formalin and through photography.
A separate status within the exhibition is given to hair, implicated in the multiple cultural and historical meanings and being a constantly returning theme of the modern art. In Rayss’s works – juxtaposed with other photos from the series – hair is important for what it was separated from, the body, and in this context it becomes its phantom, a specter.
Agnieszka Rayss’s shift towards the body, which she explores by mixing conventions, collecting its parts and types of representations and consciously using photography – with its possibilities and limitations – as a means to deal with it, is absolutely fascinating. 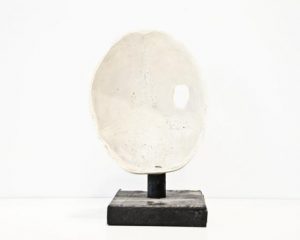