The exhibition offers a new reading of Zbigniew Dłubak’s (1921-2005) two celebrated series: his experimental works from the late 1940s, and Asymmetry, presented in a dialogue with drawings and studies for paintings that were not published or exhibited before. Geometries also features a number of hitherto unknown photographs from 1948.
Abstraction is one of the fundamental concepts of 20th-century modernism. While painterly abstraction was largely synonymous with self-referential and autonomous art, embodying the notion of “medium-specificity”, abstraction in photography came to be considered contradictory to this modernist model, because it challenged its “medium-specificity”. At times, photographic abstraction as such was contested by those who saw its primary role as leaving a trace of reality on a photosensitive material. In Geometries, abstraction serves as an overarching concept that (without delving into the modernist debate), embraces and structures photographs, drawings, and studies for paintings selected from the post-war oeuvre of Zbigniew Dłubak.
The abstract forms explored by Dłubak in the late 1940s,  early in his photographic practice, re-emerged later in the 1980s. in his Asymmetry series. Both periods of the artist’s work testify to his fascination with the possibilities of deforming the image of reality offered by the camera. In between these two series Dłubak veered towards photographic realism. His painterly practice, however, does not lend itself to such a division. The research in the artist’s archive has revealed that Dłubak’s first abstract sketches date from the late 1940s. In the 1950s, when his material situation improved, he returned to painting. While his sketches from that period are extremely realistic, the paintings are all the more metaphorical. In the early 1960s, Dłubak’s painting became abstract, just like his sketches in which he investigated new forms used in the painterly series Antropolity, Movensy, Systemy. His sketches and gouaches were never developed in relation to photography, just like photographs were not treated by the artist as a sketchbook for paintings. In spite of that, once exhibited together, the photographs and drawings reveal a tapestry of unsuspected connections and linkages: informing and supplementing each other to offer a new reading. Drawings, contrasted with widely known photographs, reveal new, previously unknown forms.
Be sure to also visit our neighbors, Starter Gallery, for the opening of Water & Gas, an exhibition by Michał Grochowiak, on the same evening. For more info see: www.starter.org.pl 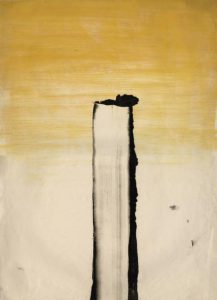