With the countdown to Euro 2012 well underway, the Archeology of Photography Foundation and the National Cultural Centre set out to explore the history of the Warsaw stadium. From March 9, a previously unknown photographic series by Zbigniew Dłubak, documenting the final stage of the construction of the 10th-Anniversary Stadium in 1955, will be on view in Warsaw’s Kordegarda gallery.

When the construction of the 10th-Anniversary Stadium began in 1954, it was already clear that it had to be completed within just one year. The arena was to be ready for the official celebration of the anniversary of the People’s Republic of Poland and the International Youth Festival. From the very beginning, the stadium was an important cog in the state’s propaganda machine, becoming one of the architectural highlights of the mid-1950s.
The construction involved outstanding architects as well as artists commissioned to create decorative elements. Among the latter were artists from the newly founded Group 55 whose task was to design a ceramic frieze for the sports ground. It was most likely for that reason that Marian Bogusz and Zbigniew Dłubak found themselves at the construction site in the spring of 1955. On that occasion Dłubak took over 30 photographs vividly capturing the ongoing work.
The photographs remained in the artist’s archive for decades, only to be discovered again in 2009, in the course of research on Dłubak’s oeuvre conducted by the Archeology of Photography Foundation. The exhibition in Kordegarda – the first public presentation of the complete series – accompanied by a book launch and a workshop program seek to revisit the history of the 10th-Anniversary Stadium and create a cultural context for this year’s football championship.
Accompanying program: 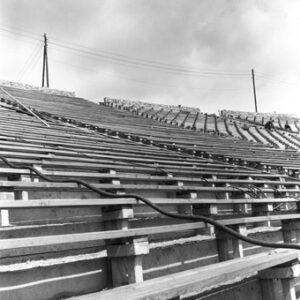