The Carousel exhibition presents 45 photographs taken by Harry Weinberg in 1966-1973. All of them were commissioned by the Eastern edition of Poland magazine, Polsha.  The Archeology of Photography Foundation has been working on the photographer’s digital archive since 2020. This is the first exposition of Weinberg’s oeuvre at the gallery at 20 Chłodna Street in Warsaw. The great majority of photographs will be presented outside the press context for the very first time.

Polsha was a magazine thought to be distributed in the USSR and the Soviet bloc countries. Its articles, richly illustrated with photographs, presented the achievements of the Polish People’s Republic in areas such as industry, science, and culture, but also the country’s social life. During 11 years of collaboration with the monthly magazine, Weinberg delivered photoreportages to about 200 articles on very diverse topics. His favorite commissions were those aimed at documenting student parties and music events. The photographer’s archive includes hundreds of photographs from the National Festival of Polish Song in Opole, ‘Piwnica Artystyczna Kurylewiczów’, ‘Piwnica pod Baranami’, and events at the student club ‘Stodoła’. Back then, Weinberg would extensively photograph celebrities of the Polish music scene and after ceasing his collaboration with the magazine in 1976, he developed this activity in the newly established company Czudowski & Weinberg (portraits, covers of music albums).

Weinberg’s photographs are full of motion, they involve a great dose of wit both when he photographs showbusiness personas or pedestrians on the streets of Warsaw and official military parades. As Kamila Dworniczak writes in the text to the photo book that accompanies the exhibition:

We rather deal with a photographer observing people and catching them exactly when they seem distracted, inattentive, when they are making random gestures or are in the middle of some commotion, and thus remain inscribed in their surroundings. The rigor of composition is intentionally ignored for the sake of spontaneity of the situation. The effect of harshness, sometimes even shifting toward specific nonchalance, seems to be emphasized not only by the grain in the prints but also by the photographer’s tendency to work with highly photosensitive negatives that enabled him to play with chiaroscuro and to capture dim figures in half-shadow. The photographer’s strategy – known also to the classical representatives of photojournalism, though not always applied to such extent – seems to be based on constant disregarding of the main subject, such as an artist performing on-stage or some official delegation, and turning toward the audience and their quite instinctive reactions.

His education in the field of photography started at the Warsaw Photochemical Technical School on Spokojna Street, where he studied together with other future photographers such as Marek Karewicz and Zofia Nasierowska. In the late 1950s, he was briefly employed as a photography instructor at the Youth Palace in Warsaw. Weinberg’s collaboration with Edward Hartwig (he worked as Hartwig’s assistant) in the early 1960s was a formative and undoubtedly important experience for him. It allowed him to learn theater photography and acquire the necessary technical skills.

In 1962, Weinberg received his first important prize – an award from the Stolica weekly for his photograph ‘The Roadway Associations’. At the beginning of 1963, he was employed as a junior manager of the photo lab at the Polonia publishing house. His responsibilities included participation in the photo-editing process and the post-production of photographs for Poland monthly, which allowed him to establish good relations with photographers working for the magazine. In 1965, he took up a post of a photojournalist in the magazine’s Eastern edition – Polsha. He was professionally associated with Polsha’s editorial office until 1976. He photographed various cultural events (such as those at Piwnica pod Baranami, Hybrydy Club, but also the Festival in Opole), industry, and subjects related to science and education. One of Weinberg’s most popular photoreportages from that period was the material ‘Mum, Come When I Take the Oath’ (1969), for which he received an award in the 13th Polish National Press Photo Contest in 1971. In 1973, he became a member of the Association of Polish Art Photographers, ZPAF.

The publication accompanying the exhibition under the same title will be available from June 22, 2021.

The project co-financed by the City of Warsaw.

The exhibition co-financed by the Culture Promotion Fund of The Ministry of Culture, National Heritage and Sport. 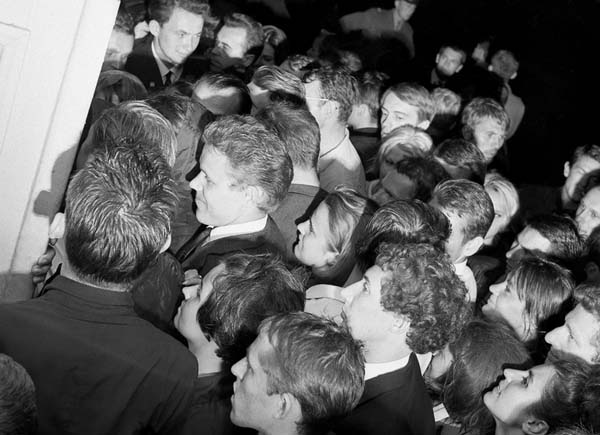