1 & 2 is an exhibition built around the issue of applying a mathematical-logical regime in artistic practice. The main pretext for this analysis is the little-recognised work of Janusz Bąkowski (1922-2005), where the theme dominated.  Bąkowski, a self-taught artist who soon became a significant member of the 1970s neo-avantgarde community, was fascinated by the relationship between the ostentatious rigour of mathematics and the freedom of art opposed to it – in his large-format photographic panels and objects, this order is reversed. The clear, realistic representation of photography, sculpture and painting gets decomposed, losing its clarity by means of precise geometric divisions and mathematical calculations.

Selecting a single theme around which the exhibition is centred allows looking at Bąkowski’s works as at an attempt to solve an enigma. The code used by the artist becomes comprehensible and more accessible while, at the same time, starting to beat a contemporary rhythm. Echoes of this rhythm can be felt in the works of Piotr Bosacki (b. 1977), whose animations are featured in 1 & 2. Built of micro-systems, the same precision and logic can be found in them.

Presented in two instalments, 1 & 2 is an exhibition-turned-meeting that follows similar themes in the works of Janusz Bąkowski and Piotr Bosacki, mutual correlations on the level of both visuals and logic. The show comprises sketches, diagrams as well as the two artist’s finite works.

The first part of this artistic meeting defines its rules and delineates borders along which Piotr Bosacki will be moving in part two.

The exhibition is part of the Archaeology of Photography Foundation’s Living Archives series, devoted to creative dialogue between contemporary artists and
the classics of Polish photography whose archives are in the APF’s custody.
Project curator: Karolina Lewandowska
The Living Archives project is financed by the Ministry of Culture and National Heritage
The space at ul. Andersa 13 is used for cultural purposes by the Archaeology of Photography Foundation thanks to the support of the City of Warsaw’s Dzielnica Śródmieście. 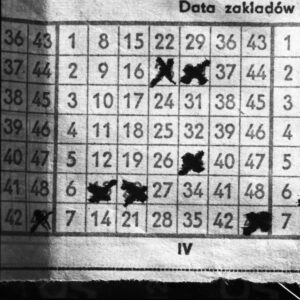