Up until the 11th of September, the Asymetria Gallery will host an exhibition that is the second installment of new work by Krzysztof Pijarski who was invited to confront the archive of Zbigniew Dlubak, Polish photographer, painter, art theorist and critic. more photographs>>>

This project stems from a need to expose fragments of Dlubak’s heritage (currently researched by the Archaeology of Photography foundation) before the eponymous Sources are forced into a pre-ordered archive structure, made equal, numbered and labeled. Krzysztof Pijarski – a young photographer, art historian and critic – entered into the realm of boxes, folders, cabinets and cartons as if an uncharted land, through which he traveled with a camera and the sensitivity of a discoverer attentive to seemingly insignificant traces. Rather than the relatively well researched body of Dlubak’s work, he was drawn to its margins, things usually invalidated in official art history. 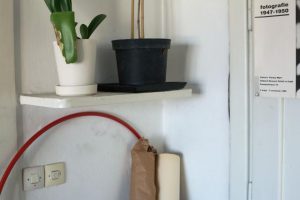