The exhibition Lux is a continuation of the Archeology of Photography Foundation’s series of projects based on collaborations with contemporary artists which aim to inspire theoretical reflections on important issues for the history of photography and research practices. The formal background and past ventures of the artists invited to this project are radically different. This heterogeneity opened an opportunity for a multi-layered examination of a theme which is broad and inspiring in various respects – from metaphysical to technological, but which is also dangerously easy to trivialise. In the first ever presentation of these pictures and films, the artists engage with the theme of light, its relationship to the ontological essence of photography, and its significance in art.

Przemek Dzienis and Szymon Rogiński focus on different aspects relating to light, experienced by a man in a macro (celestial objects, natural phenomena) as well as micro scale (illumination of small objects from our surrounding). Over the course of the past few months, Rogiński documented natural phenomena, such as the Perseids, the moon, stars, or electrical breakdowns. Classic in form, black and white, long exposure photographs are quiet and contemplative. The photographed phenomena have been described in magnitudes – a unit used for describing the brightness and size of astronomical objects.

Przemek Dzienis starts with a physical nature of light and explores its transformations and colour perception. Crystal, the central object in his work, is often used in science for illustrating the behaviours of light, exploring its refractions and reflections, or the dispersion of white light into components. Flickering, illuminated by a ruby laser light, and strongly magnified in the photograph, it enables an inspection of the reflexes inside its structure. The work was lenticular printed, i.e. by using an optic system of an array of micro-lenses. It creates an impression of three-dimensionality or perhaps even movement, highlighting the evanescence and dynamics of the light phenomena. The photograph is accompanied by a short film which registers the flow of laser light.

In the works by Karolina Breguła and Magda Hueckel, light and darkness play a metaphorical role. For Magda Hueckel, light becomes the symbol of healing and recovering from an illness. The author revisits the cycle of dark, uneasy Obsessive Self-portraits, in which she confronted the fear connected to the decay of body and passing. She juxtaposes the ten-year old series with its newer version, which corresponds to the original in terms of the frame selection, and is a reference to healing body from a tumor. Through this gesture, the light is symbolically let in, both into the photographs and into the artist’s body.

Karolina Breguła’s film Photophobia is a dark, metaphorical story about the fear of darkness. Its protagonist compulsively collects light bulbs in an attempt to limit the liberty of her fellow district residents. We follow her through the corners of the city, which is artificially lighted or shrouded in darkness. As we accompany her everyday at work, we keep asking ourselves about the source of her obsession. The show is accompanied by a book under the same title (to be launched at the end of October). It continues the series inaugurated with Emulsion (2015), which focused on the material aspects of photography. Lux features contemporary and archival works dedicated to light as well as commentary from the perspective of physics and research articles.
Marta Przybyło-Ibadullajev

Project is co-financed by the Ministry of Culture and National Heritage.

The project is co-financed by City of Warsaw

Technological support has been provided by Canon. 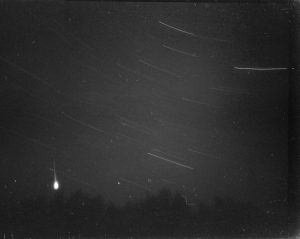