(I’m) Moviemaking is a unique, never previously shown film by Zofia Chomętowska, offering glimpses from the private life of her aristocratic family and friends in the late 1920s. The film is a one-of-a-kind 27-minute-long montage of archival footage, conceived by Karolina Puchała-Rojek, with literary commentary by Mikołaj Łoziński and music by the Warsaw Village Band. The material remained in obscurity until only recently, as did the very fact that Chomętowska had ever made films, even though this major pre-1950 Polish woman photographer actually debuted, at the Poznań National Exhibition in 1929, with a film rather than a photography project.

The film, in untypical Pathé Baby format, digitalized and montaged for the Archaeology of Photography Foundation, contains phenomenal and unique images from Chomętowska’s private life – from her birthplace Polesie estate at Porochońsk, from Warsaw’s Królikarnia, from Venice and Tunis. Besides Chomętowska herself, the film portrays her husband Jakub (probably author of many of the sequences) as well as numerous well-known figures such as Countess Izabella Radziwiłł, Lieutenant-General Sir Adrian Paul Ghislain Carton de Wiart VC, KBE, CB, CMG, DSO, Józef Haller artist Jadwiga Tereszczenko or writer and publisher Michał Gwalbert Pawlikowski. The film offers unique insight into the Polesie landscape of the era and the life led by the noble-born Chomętowska.

The screening will be followed by a discussion focused on the phenomenon of amateur documentary films and found footage. Speakers will include film critic Tadeusz Sobolewski, art conservation expert Monika Supruniuk, visual artist Tomasz Dubiel as well as the film’s co-authors: Mikołaj Łoziński and Karolina-Puchała-Rojek. Moderation: Jakub Śwircz.

On sale during the event: Archivo Privado, a new publication with a selection of photographs from Chomętowska’s private archive, and publications from the Living Archives series.

A day earlier, the Archaeology of Photography Foundation Gallery will host the opening of a new project by Marzena Nowak, a sound installation combined with the screening of a short excerpt from Chomętowska’s footage. The installation, an intimate dialogue between a woman and a man, created on the basis of dialogues by Antonioni and Bergman among others, highlights the private aspect of Chomętowska’s film and photography. The exhibition takes place as part of the Living Archives project.

Film digitalized with the financial support of the National Audiovisual Institute as part of the Digital Heritage project. 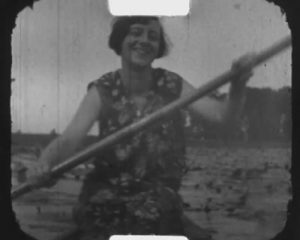