This exhibition marks the first presentation of works by this author at the Archeology of Photography Foundation gallery, and is also an inauguration of the Foundation’s works on the photographer’s archive. Jan Jastrzębski (1925-2001) worked as a reporter for Kraj and Miesięcznik Polski (The Polish Review / La Revue Polonaise). He photographed Polish province and industry, and was also involved in creating documentations of works of art and landscape photography.

Photographs presented at this exhibition occupy a special position within the artist’s output. They document the renovation of the Poniatowski Bridge which took place in 1985-1990, due to the replacement of its metal construction. Jastrzębski, who lived in the Powiśle area of Warsaw, witnessed consecutive stages of its gradual disassembly, and later (although to a lesser degree) its reconstruction.

The contrasting prints, filled with deep, saturated black, demonstrate the process of destruction and reconstruction of the bridge spread over time. The uncovered structure, previously shielded by a roof, was penetrated by snow and sand. Deserted spaces appearing in some photographs, captured during the winter season, when the renovation works were put on hold, resemble old theatre decoration; then, there is also ordinary life going on around this ominous skeleton. Photographs from the later stages of the renovation show fragments of spans covered in massive pieces of fabric, like from Christo’s installations.

With time, the formally appealing, uncanny photographs gain a symbolic character. The history of the bridge, built just before World War One and destroyed or transformed several times since, provides a reflection of the entire city’s story. Engineered by Mieczysław Marszewski and Wacław Paszkowski, with architectural design by Stefan Szyller, was destroyed in 1915 by the Russian army. Rebuilt in the 1920s, it was a witness to the famous meeting of Marshal Józef Piłsudski and President Stanisław Wojciechowski during the May Coup d’État of 1926. Having been blown up during the Warsaw Uprising and rebuilt according to Stanisław Hempel’s design, it was one of the first post-war projects to be reintroduced for use, in 1946. The renovation captured by Jastrzębski took place during the period of political transformation in Poland, which also begs for a symbolical reference to bridging two separate realities. In the similar context works from this series were presented at the iconic exhibition Looking East at the Image Gallery in Aarhus, Denmark.
In the light of numerous reconstructions, teardowns, and demolitions of important architectural objects in Warsaw, it also provokes questions about the character and dynamics of processes taking place in urban space. 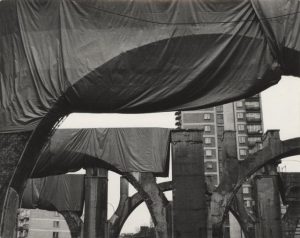