A new Living Archives project is soon to be unveiled. This time displayed in Warsaw public space will be Karolina Breguła’s Corrective Photographs – urban wallpapers created using images from the Zofia Chomętowska archive. The project will be on show from 14 September through 3 October. The opening reception, accompanied by an exhibition explaining the project’s background and the opening of the Foundation’s new premises, will take place on 23 September from 17.00 to 22.00 as part of the event Where Is Art? Warsaw Contemporary Art Gallery Route.

Corrective Photographs, a project by Karolina Breguła (b. 1979) – seven wallpapers created using selected images from the archive of Zofia Chomętowska (1902-1991) – are about to hit the streets of Warsaw. Installed in shop windows, on house walls, in pedestrian underpasses, seemingly unconnected with the place, the magnified images carry a critical potential, highlighting imperfections, suggesting deficiencies and potential complements – subversively correcting. Scattered around Śródmieście (downtown), often in hidden or unobvious places, the wallpapers are meant to intrigue, reveal hidden desires, surprise and encourage reflection on our city’s space and needs. The sites include: the wall by Cud nad Wisłą Club, Skwer Tekli Bądarzewskiej at Andersa Street 13, Krucza Street by Widok Street, the wall on the green square at Oboźna Street near Kafka Café, the underpasses of the Dworzec Zachodni bus/train station, and the Chłodna 25 Club & Café.

It should be noted that the images have been created using photographs from the archive of Zofia Chomętowska, who, with great sensitivity, documented Warsaw – its development in the 1930s, the wartime destruction and the postwar reconstruction effort.

An exhibition presenting the project’s background will open on 23 September, inaugurating the Archaeology of Photography Foundation’s gallery.

Corrective Photographs are part of the APF’s long-term Living Archives project devoted to remembering the work of classic photographers through contemporary-art statements.

The project is financed by the Ministry of Culture and National Heritage. 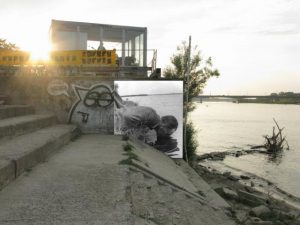